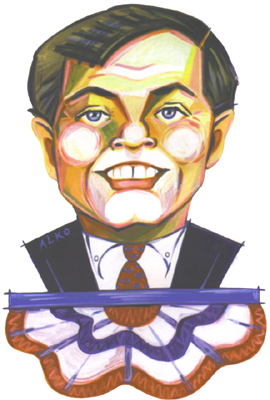 When I interviewed then Republican Congressman Lindsey Graham in 2002 he was running for his mentor, Strom Thurmond’s South Carolina Senate seat.  He described himself as “butter pecan,” perhaps a rebel fave, certainly not vanilla, but not meant to be a popular “nut” as some would characterize him. Others describe him as an opportunist.

President Trump’s one-time harsh critic —Graham called Trump a “jackass” when he threw his hat in the presidential ring in 2016– is now a staunch supporter of the president. Trump in typical Trump style got even by giving out Graham’s personal cellphone number at a campaign rally. The two, who haves golfed together, have had a love hate relationship. Graham called Trump a “kook” and said, “I think he’s crazy” and “unfit for office.” Although Graham didn’t vote for Trump the first time around, he’s supporting him this time. And what’s more, he’s even passed along his new private cell phone number to the President.

As the lone Republican dissenter on the House Judiciary Committee on the second article of impeachment accusing President Clinton of perjury in a civil lawsuit, then Rep. Graham wasn’t afraid to show his defiant side. Yet as the lead sponsor of the anti-abortion Unborn Victims of Violence Act, Graham was loyal to his Republican constituents. Regardless of how his record is viewed — he broke with House leadership in supporting campaign finance reform — the four-term congressman when elected to the Senate was one of the rising stars in the Republican party. This personable politician and free spirit managed to win the support of the White House despite his early support of Arizona Sen. John McCain’s Republican bid for president. He stepped into Republican Sen. Strom Thurmond’s oversized shoes in South Carolina, thus swaying the balance of power in the Senate.

Parts of that interview are relevant today:

Karen Feld: Do you think your political future will be enhanced by running for the Senate rather than gaining seniority in the House?

LINDSEY GRAHAM: Every 50 years in South Carolina we change senators whether we need to or not. This is my window. It’s a big deal back home, and it’s a big deal nationally. The opportunity to move up in South Carolina is definitely limited. Sen. Thurmond was elected to the Senate in 1954, and I was born in 1955. Fortuitous events occur — being around when the seat comes up and not having a primary.

KF: Although you’ve broken with party ranks, you manage to maintain a strong but still independent relationship with the White House. The president even appears in a political commercial for you. How is it possible to be an independent thinker and still have such strong support from the administration?

LG: It’s a business relationship and a personal relationship. When you lose a fight for team captain, it doesn’t mean that you quit the team. The concepts that draw me to being a Republican are still there. The president and vice president and I have gotten to know one another. Politics is always a game of addition, adding supporters. The president is over-the-top popular in South Carolina. I’ll be a vote for the Bush agenda, and be helpful in confirming conservative judges and supporting the president’s tax policy. The national aspect of my race is a benefit for the White House.

KF: Is the Bush versus McCain race playing out all over again in South Carolina — does this election reopen old wounds?

KF: Does the fact that you’re a fair-haired GOP mean that you’re in line with the party on everything?

LG: No, for example, I voted against the trade bill because I think our manufacturing base is being lost in this country. The textile industry won my allegiance because of the great inequity.

KF: How has Congress changed since Sen. Thurmond’s heyday?

LG: In one week in Washington you can turn an up-and-coming star into an irrelevant has-been. We live in a 60-second sound bite, unlike when Sen. Thurmond came along and it was a seniority-driven institution. Today everything is consumed politically through television.

KF: You’re single, but where do you think we should draw the line in terms of delving into politicians’ personal lives?

LG: I think I should have a personal life! I’m very much a sinner, but I don’t need to share my sins with the world. We don’t have to know everything about everybody.

KF: How are you a sinner?

LG: The way everybody sins, but I would hope that I’m a very honest, upfront kind of guy. I have never abused my office. I think that should be the standard.

KF: With so much partisanship in the House, is it difficult to build personal friendships with your colleagues across the aisle?

LG: Friendships are based upon common interests: the passion for politics, people who believe in things. My liberal friends have a passion for their politics. That intrigues me. I’m not a vanilla ice cream kind of guy. I’m a butter pecan kind of guy.

KF: More than once you’ve broken ranks to reach across the aisle, as you did on campaign finance reform. Do you think that will affect your relationships in the House, your Senate race or your political future beyond that?

LG: People in the [House Republican] conference didn’t like it, but that’s politics. We can’t kill bills through procedural cuteness.

KF: What about the GOP leadership? Did they withhold favors or support because of your vote?

LG: They’re upset, but I’ve been down that road many times. If you’re going to play revenge politics, this is the wrong place to do it with a six-seat majority: All you need is five friends, or the other person needs five enemies.

KF: What is the origin of your independent streak?

LG: I think me! If you put something in front of me, I’m going to look at it. I was the first in my family to go to college. My parents worked very hard to put me through school. They owned a liquor store, a bar, a restaurant, and a pool hall [in Central, South Carolina], so I grew up in a beer joint. I’m not a country club Republican. I look at things, and do what I think is a just result.

KF: What do you consider your greatest accomplishment?

LG: I’ve been part of the team that has really changed the course of the debate in this country. We’re no longer talking about should we balance the budget. Nobody wants a deficit. Welfare reform was an accomplishment. The big picture items: We no longer take money from Social Security to run the government. Individually, I’ve been able to speak my mind in an effective way and communicate my beliefs when attention is on me.

KF: Was Sen. Thurmond a mentor?

LG: No, he’s a political legend. I was fairly apolitical and intent on being a lawyer. But I’ve always admired how much goodwill the senator was able to generate. You can’t buy that.

Read the original article on PoliticalMavens.com